I have seen many people reporting of knee pains. Some who had a sporting incident, resulting in a traumatic damage to the knee; while others have been a gradual progression of knee pain. Initially the pain is described as mild, an annoying ache. With ongoing aggravation, the pain progresses in a sharper type, where it can eventually stop people from doing their daily activities. With these gradual progression type of pain, it is important that the knee is looked after quickly so that further aggravation and worsening of symptoms can be avoided.

The quadriceps muscles are made up of 3 main group of muscles. The first in the Vastus Lateralis; the second is the 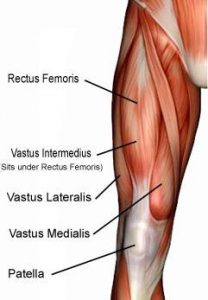 Each of these muscles will interact in such a way that the knee cap is pulled directly up along the patellar groove. By keeping the knee cap moving smoothly along this groove, you can minimise the pressure around the knee cap.

As you can imagine, any issues with the quadriceps, will result in this finely tuned movement of the knee cap to be disturbed, causing issues in the future.

Improper training, could potentially result in the VL being overworked and getting much stronger than the VMO. You can see this when someone does a squat or a lunge and their knees are moving sideways. This results in an imbalance of the patella as it move up and down along the patella groove. The result of this would be increased friction along one side of the patella which will gradually become increasingly worsening knee pain.

Injuries to the knee will also affect the movement of the patella. The more significant and frequent injuries you have in the knee, the more your VMO becomes less activated. This will have the same impact as the above scenario over time; mainly a gradual worsening of pain; as well as wear and tear along your knee cap.

It is therefore imperative that you get your knee pain looked at as soon as you can. Further postponement as well as ongoing aggravation will result in worsening of your symptoms and finally preventing you from doing your exercises.

Come to our physios at Capital Physiotherapy. Our appointments are strictly 1-on-1 and we provide longer than industry standard appointments to truly understand, not just your body, but your exercise routine as well as a multitude of other factors that can affect you. It is only with a great understanding of your situation will you achieve the outcome you deserve.

So don’t wait any longer and call us now!